I especially like the fact that Ian Stewart includes the famous Black-Scholes equation (equation #17) on his list of the 17 equations that changed the course of history; Equations (2), (3), (7), and (17) play particularly important roles in Finance 4366! 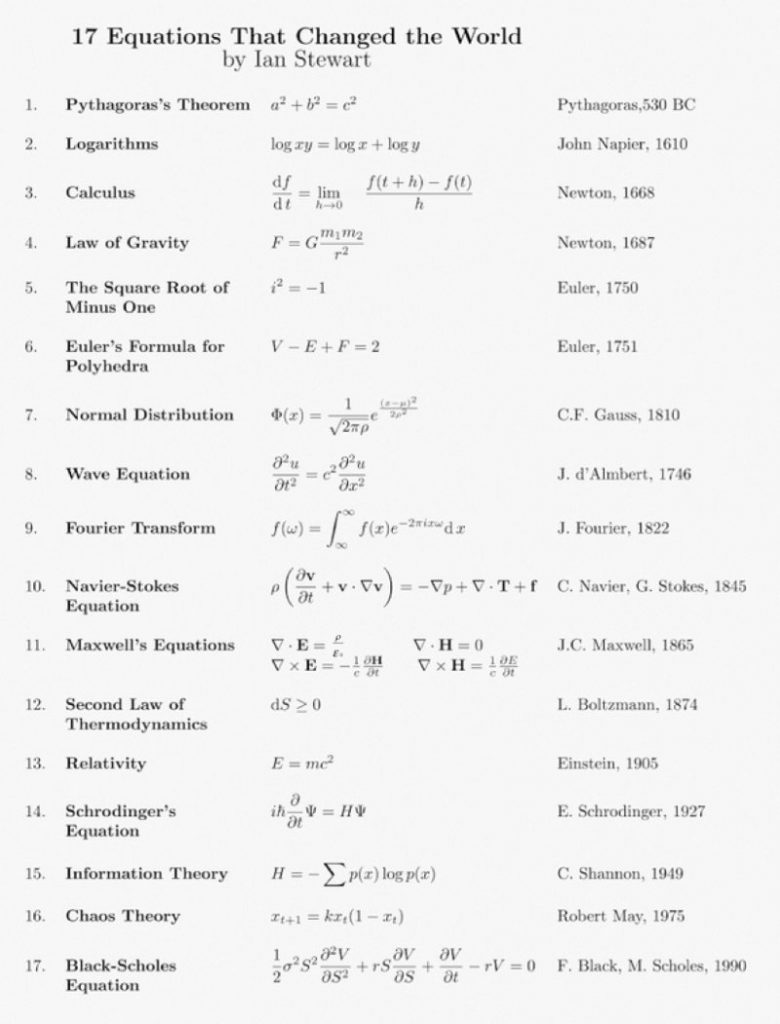 The 17 equations that changed the course of history

From Ian Stewart’s book, these 17 math equations changed the course of human history.

Here, I’d like to call everyone’s attention to an interesting (non-finance) probability problem related to statistical independence. Specifically, consider the so-called “Birthday Paradox”. The Birthday Paradox pertains to the probability that in a set of randomly chosen people, some pair of them will have the same birthday. Counter-intuitively, in a group of 23 randomly chosen people, there is slightly more than a 50% probability that some pair of them will both have been born on the same day.

The following graph illustrates how the probability that a pair of people share the same birthday varies as the number of people in the sample increases: 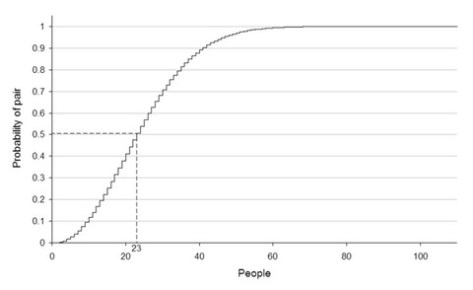 [1] It is worthwhile noting that real-life birthday distributions are not uniform since not all dates are equally likely. For example, in the northern hemisphere, many children are born in the summer, especially during the months of August and September. In the United States, many children are conceived around the holidays of Christmas and New Year’s Day. Also, because hospitals rarely schedule C-sections and induced labor on the weekend, more Americans are born on Mondays and Tuesdays than on weekends; where many of the people share a birth year (e.g., a class in a school), this creates a tendency toward particular dates. Both of these factors tend to increase the chance of identical birth dates since a denser subset has more possible pairs (in the extreme case when everyone was born on three days of the week, there would obviously be many identical birthdays!).

Probability and statistics, along with the basic calculus principles covered last Thursday, are foundational for the theory of pricing and managing risk with financial derivatives, which is what this course is all about. During yesterday’s class meeting, we introduced discrete and continuous probability distributions, calculated parameters such as expected value, variance, standard deviation, covariance, and correlation, and applied these concepts to measure expected returns and risks for portfolios comprising risky assets. During tomorrow’s class meeting, we will take a deeper dive into discrete and continuous probability distributions, in which the binomial and normal distributions will be showcased.

On Tuesday, February 2, we will introduce and describe the nature of financial derivatives, and motivate their study with examples of forwards, futures, and options. Derivatives are so named because they derive their values from one or more underlying assets. Underlying assets typically involve traded financial assets such as stocks, bonds, currencies, or other derivatives, but derivatives can derive value from pretty much anything. For example, the Chicago Mercantile Exchange (CME) offers exchange-traded weather futures and options contracts (see “Market Futures: Introduction To Weather Derivatives“). There are also so-called “prediction” markets in which derivatives based upon the outcome of political events are actively traded (see “Prediction Market“).

Besides introducing financial derivatives and discussing various institutional aspects of markets in which they are traded, we’ll consider various properties of forward and option contracts, since virtually all financial derivatives feature payoffs that are isomorphic to either or both schemes. For example, a futures contract is simply an exchange-traded version of a forward contract. Similarly, since swaps involve exchanges between counter-parties of payment streams over time, these instruments essentially represent a series of forward contracts. In the option space, besides traded stock options, many corporate securities feature “embedded” options; e.g., a convertible bond represents a combination of a non-convertible bond plus a call option on company stock. Similarly, when a company makes an investment, so-called “real” options to expand or abandon the investment at some future is often present.

January 22, 2021 ~ drgarven ~ Leave a comment
The January 26th assigned reading entitled “The New Religion of Risk Management” (by Peter Bernstein, March-April 1996 issue of Harvard Business Review) provides a succinct synopsis of the same author’s 1996 book entitled “Against the Gods: The Remarkable Story of Risk“. Here’s a fascinating quote from page 33 which explains the ancient origin of the word “algorithm”:

“The earliest known work in Arabic arithmetic was written by al­Khowarizmi, a mathematician who lived around 825, some four hun­dred years before Fibonacci. Although few beneficiaries of his work are likely to have heard of him, most of us know of him indirectly. Try saying “al­Khowarizmi” fast. That’s where we get the word “algo­rithm,” which means rules for computing.”

Note: The book cover shown above is a copy of a 1633 oil-on-canvas painting by the Dutch Golden Age painter Rembrandt van Rijn.
January 21, 2021 ~ drgarven ~ Leave a comment

This blog entry provides a helpful follow-up for a couple of calculus-related topics that we covered during today’s Mathematics Tutorial.

Since many of the topics covered in Finance 4366 require a basic knowledge and comfort level with algebra, differential calculus, and probability & statistics, the second class meeting during the Spring 2021 semester will include a mathematics tutorial, and the third and fourth class meetings will cover probability & statistics. I know of no better online resource for brushing up on (or learning for the first time) these topics than the Khan Academy.

So here are my suggestions for Khan Academy videos that cover these topics (unless otherwise noted, all sections included in the links which follow are recommended):

Finally, if your algebra skills are generally a bit on the rusty side, I would also recommend checking out the Khan Academy’s review of algebra.